DON'T BE INTIMIDATED, KEEP CALM AND REFORM THE ORP!

WE ARE CERTAIN THAT ALL OF THE STATE CENTRAL COMMITTEE MEMBERS RECEIVED THE BELOW LETTER. There are a lot of allegations in this letter that should do nothing to alleviate fears of the ORP acting in a manner that is not ethical to reasonable persons or to conservatives. We will go line by line with our opinions and ask questions we feel need to be answered as a result of this letter. This analysis should set the record straight and should be shared with your constituents.

"This letter is in response to so-called resolution-making false allegations regarding State Candidate Fund expenditures. These potentially libelous allegations are from self-promoting individuals that have done little to support the Republican Party and its candidates. This letter will set the record straight and should be shared with your constituents."

"The Ohio Republican Party (ORP) State Candidate Fund (SCF) is a statutorily created fund, which various individuals and entities, including candidates, are permitted to support and raise funds into, and the contributions into the fund and expenditures out of the fund cannot be earmarked; however, expenditures out of the account are made for the purposes of supporting statewide and general assembly elected officials or endorsed candidates."

So, first is the "longstanding tradition" comment. The SCC comes into existence every two years (yes this changes in 2022, after that it will be every 4 years). Each SCC is a new committee and there is not such a thing as a longstanding tradition as far as the law goes. The SCC bylaws regulate how obligations are made and the discretion of the chairman is not one of them. Article three, section seven, of the Ohio Republican Party State Central & Executive Committee bylaws, state “No officer or member of the Committee shall have any power to bind this Committee by any financial contract or obligation except as provided by these rules, or by resolution properly adopted by a majority of the members of the Committee present and voting and properly recorded by the Secretary in the minutes of the Committee.” And Article six Section 2 Paragraph d states "No ORP candidate services shall be used to attack any other Republican candidate in a primary election. ORP candidate services will only be used in a primary campaign when the candidate is supported in accordance with the primary policy guidelines." Article 3 and article 6 are specific enough to not allow a longstanding tradition of supporting elected candidates. Quite clearly, by all reasonable persons, the conclusion would be that the bylaws would prevent more than a million dollars in contributions at the discretion of the Chairman. This, if the SCC members agree, is a misappropriation of funds.

This paragraph would have been more properly worded "The staff at the ORP has a longstanding tradition of intimidating SCC members and using party funds to re-elect members that support the chairman. As chairman I support who I want and if you disagree with me I will dismiss you and call you a malcontent. This year, ORP has made SCF expenditures to two incumbent Republican officeholders, Governor Mike DeWine and Attorney General Dave Yost. Those expenditures are lawful and proper and are made at the discretion of the Chairman - so to the malcontents that question this "let them eat cake" I say.

"In addition to SCF expenditures, the ORP may provide incumbents with in-kind contributions, which can include things like office space, staff payroll, and other services. These types of inkind contributions have also been long-standing practices for the ORP and are also made at the Chairman's discretion."

In-kind contributions are contributions for the purposes of law. Again there is no such thing as long-standing practices for the SCC and the SCC bylaws are pretty clear on this point and their intent. The Ohio Revised Code 3517.102(B)(6)(b)(i) specifically states “No state candidate fund of a state or county political party shall make a transfer or a contribution or transfers or contributions of cash or cash equivalents to a designated state campaign committee in a primary election period or in a general election period aggregating more than: ...(I) Five hundred thousand dollars to the campaign committee of any one statewide candidate.

"Support of incumbent elected officials outside the election year does not constitute an official endorsement."

Ummmm...... when there are other candidates that have declared they are running and funds are used by incumbents for their re-election campaigns - it constitutes an unofficial endorsement by the chairman of the incumbents. That type of endorsement is not in the chairman's job description. There is literally no other way to take this type of action.

"lt is important to note that the filing deadline for candidates for the 2022 election cycle is February 2, 2022. Endorsement of candidates in those races will be at the sole discretion of the members of the State Central Committee and may take place at any regular meeting of the committee."

We believe that the intention here is to say that "until the primary officially starts, the chairman of the party is allowed to support and endorse candidates of his choosing at his discretion with the full resources of the party, without limits, and without the knowledge of SCC members." It would be hard to envision a business being run in such a manner. It would be even harder to believe that SCC members would approve of that? What happens when the chairman spends millions on an incumbent candidate that is not endorsed by the SCC? Have those millions of dollars just been thrown away and wasted? What happens if the party does not decide to endorse anyone? We don't think that reasonable people nor a judge would agree with the chairman's interpretation of what is within his discretion.

"The scurrilous charges being made by people, who do not understand Ohio campaign finance law or the ORP bylaws should be ignored. I cannot begin to understand the motivations behind their misguided actions, but I do know they have no interest in the well-being of the Ohio Republican Party."

The motivations of the Committee for a Better Ohio are simple. We want a level playing-field, honesty, integrity,  transparency, and ethical behavior. These simple policies allow organizations to flourish and engender trust.

Our actions are not misguided, they are guided by the original tenets of truth, justice, and the American way. We want to see Republican policies prevail. We do not think that acceptance of CRT, the BLM movement and the characterization of Ohio as a systemically racist State, the categorization of businesses into essential and non-essential, a lack of medical freedom in choosing masks and vaccines, vaxamillion, support for Common Core, more gun laws, biological men competing against biological women in Ohio High School and college sports, approving of the Ohio Health Director to allow changes to birth gender on birth certificates, no photo identification for voting, and a wholesale rejection of an independent audit to ensure election integrity - are not popular policies - and that money spent supporting candidates that support these policies is wasted. We believe that a majority of Ohio Republicans agree with us. We believe that a majority of County Central Committee members agree with us 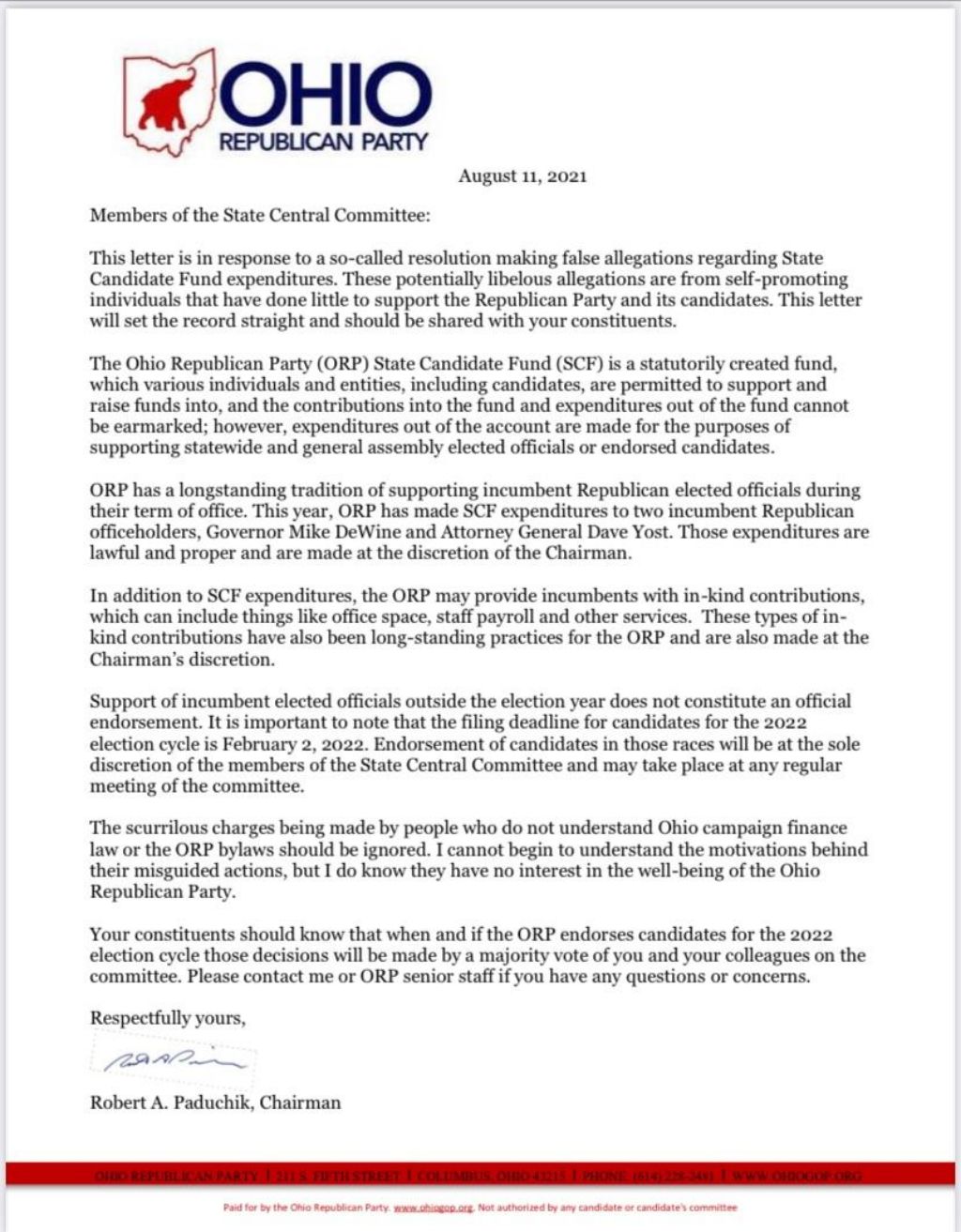